The view from Tahquitz Peak in the San Jacinto Mountains was A-M-A-Z-I-N-G!

The day started off cloudy while driving up the 74 to the small mountain town of Idyllwild, but as we got closer to the ranger station the clouds started to disappear and the sun began to shine through. The ranger station was just off the highway but wasn’t open yet.  They had a small station outside that allowed you to get your permit before they opened so you could get an early start.  After we filled out the form and tucked the carbon copy in the pack we headed through the windy road of homes.  We came to the Forest Dirt road that would eventually lead us to the trail head.  This road was very steep I was thankful we brought Don’s truck and not my car, but when we finally made it to the trail head there were a lot of civic type cars that had made it there just fine.

We started the trail at 7:30 am and it was still a little chilly.  I was excited to try out my new Columbia Plaid shirt along with my Columbia fleece vest.  They worked perfect together helping me stay warm but with just enough venting to keep me from getting too warm.  The trail started off with a slight incline, it was definitely getting my heart going.  We were surrounded by beautiful Manzanita Trees.  The burgundy stems popped against the bed of dying pine needles.  The trees followed the trail all the way to the top.  At the beginning they were large overgrown crowding each other but as we got towards the top the trees became small bushes but their beauty was still larger than ever. 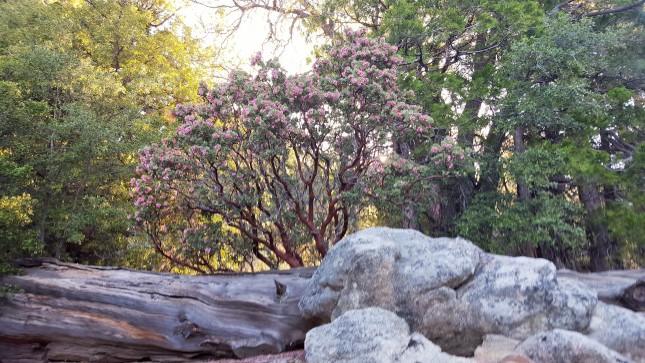 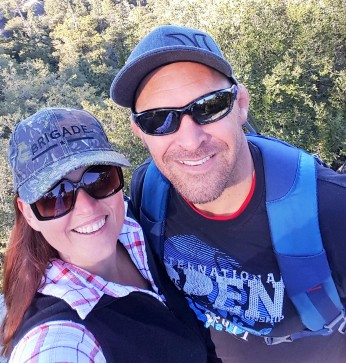 The trail never seemed to let up but only in a few spots. Yet at every switch back turn you had to stop to take in the view. You couldn’t help yourself.  The brilliant blue sky sitting on top of the white cotton candy clouds wasn’t something you could just walk by.  We came to a life size rock picture frame the framed a living picture of nature behind it.  Something that probably gets changed out everyday but never short of beauty. 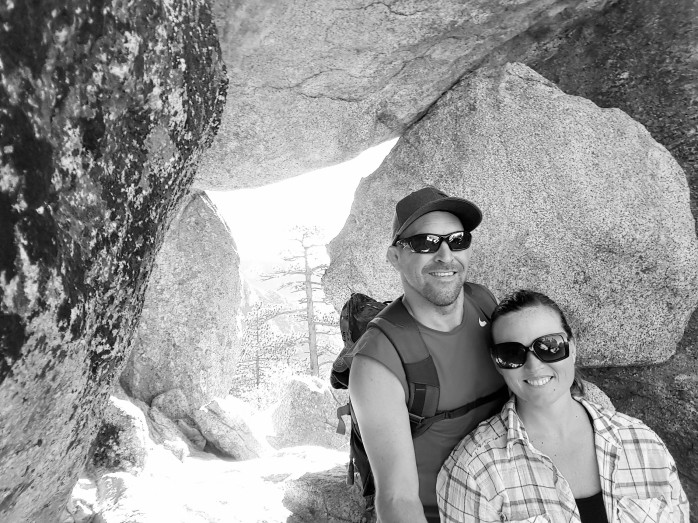 As we got higher the trees started to spread out.  We were able to get better views as we got higher and higher.  The peaks of smaller mountain ranges crested above the clouds .  They looked as though it was built for an amusement park. The landscaped looked so perfect that it had to be fake.  At the next switchback turn the rocks opened up offering us a view to the other side of the mountain.  The mountain side dropped down into a valley on the other side giving us peeks of neighboring mountain range.  The switchbacks continued up until we met up with the other trail.  We followed that trail down for a few 100 feet to check out the small patch of snow that was still on the trail. Thankfully the South Ride Trail was free of snow.  A couple people that we met at the top had taken Devil’s Slide trail to Tahquitz Peak and came across ice patches on the trail and took a few falls. 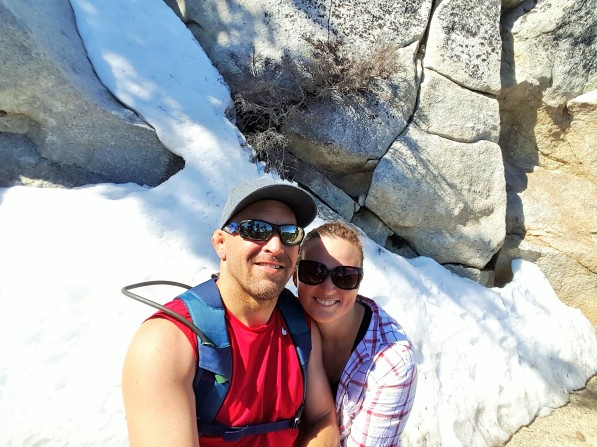 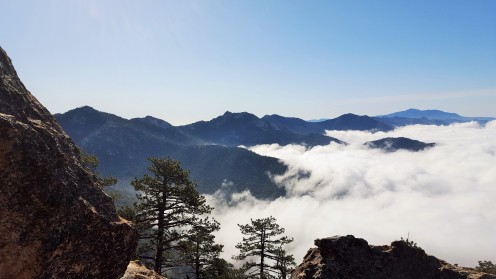 After we passed the split the top was only a few more feet up.  We made it to Tahquitz Peak Lookout and we were the only ones there.  It was beautiful.  You could see Mt. Baldy peeking out of the clouds in the distance on one side and on the other side the clouds were pushing their way up the mountain finding low points spilling into the valleys on the other side.  We sat up there for awhile taking in the views all around us when another set of hikers joined us.  A father and son that were hiking together for the day.  The father had been on the trail since 6 am starting off on his 7 day hike along the PCT and his son was hiking just this part as his dad passed through.  We spent about 30 minutes talking with them when another set of hikers and their dog joined us.  The father and son said their good byes and we got some advice on where to eat from the hikers that just joined us, then we made our way down. 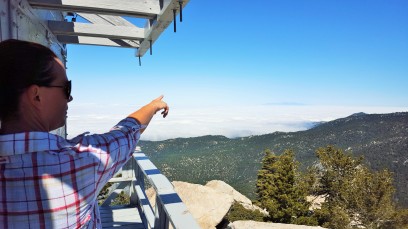 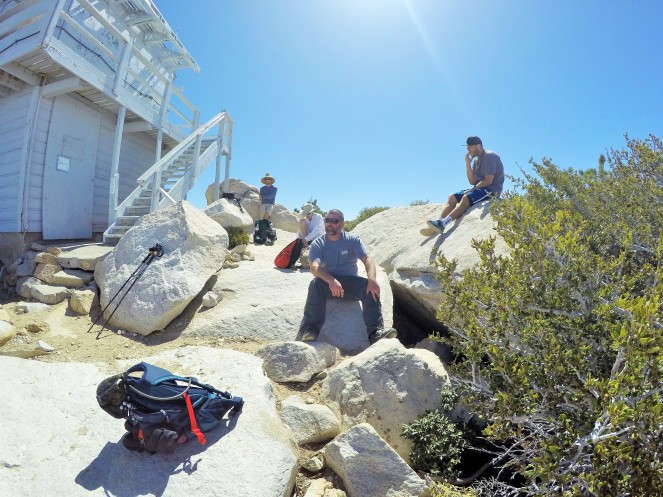 The hike down, like always, was a lot faster but I could feel the pain in my knee and my large toe started to get a hot spot on the bottom of it.  The blister formed about 1/2 way down telling me that I needed better shoes or better socks.  I have been wanting to get a pair of sock liners, this trip just made up my mind to get them.  The clouds that were below the city of Idyllwild were now creeping up the mountain waiting for us on the trail.  We made it back to the truck.  The parking lot was somewhat full even though we hardly saw any hikers on the trail. The total trail was 6.5 miles and it took us about 4 hours to complete it.

We made our way down the dirt road which seemed so much steeper then when we went up.  We made it back to the highway in no time and stopped at the Mile High Café, one of the suggestions of the hikers at the peak, and we were not disappointed.  The hamburgers were a perfect ending to a great hike.

View all the Pictures from this Hike